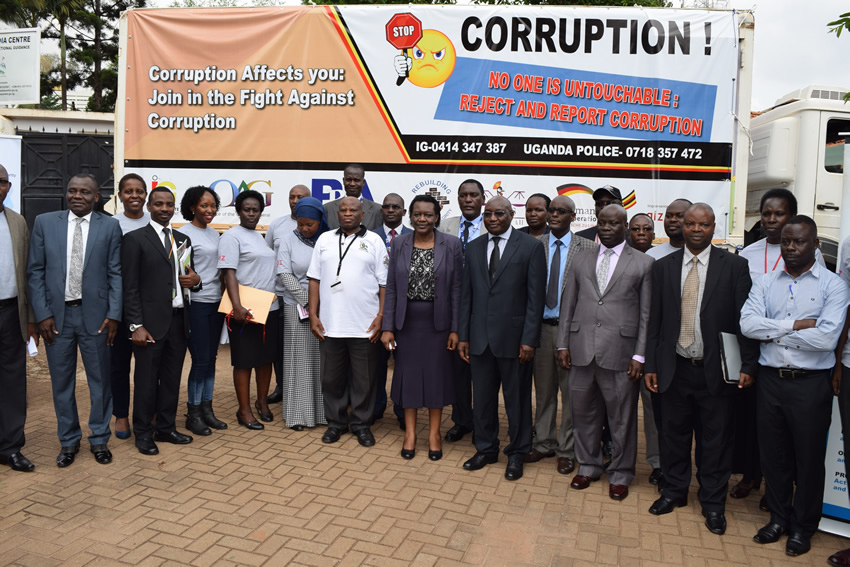 In a collaborative approach and effort, the anti-corruption Agencies namely:the Inspectorate of Government (IG), Public Procurement and Disposal of Public Assets Authority (PPDA), Office of the Auditor General (OAG) , Justice Law and Order Sector (JLOS) and Directorate of Ethics and Integrity (DEI) have come together to form a ‘syndicate of anti-corruption agencies to counter all forms of corruption.

This collaboration is supported by the German Government through Deutsche GesellschaftfürInternationale Zusammenarbeit (GIZ), under the Governance and Civil Society Programme.

Every year, a special week is set aside in Uganda in respect of the fight against corruption. The United Nations (UN) General Assembly by resolution 58/4 of 31st October 2003, designated 9th December as the International Anti-Corruption Day.

In Uganda, the focus this year is on engaging the public under the theme: Restoring Integrity in Public Service; Regaining Citizen Trust in the Anti-Corruption Fight.”
As one of the activities to mark the Anti-corruption week 2017, a national awareness campaign was launched and joint awareness sessions held inMasaka, Lyantonde,Mbarara,Ibanda,Fortportal and Mubende with different stakeholders including the government Ministries, Departments and Agencies, Media ,civial society organisations and the community to fight corruption.