Who Is Responsible for Maintenance of Government Assets?

The Board, Management and staff of the PPDA congratulate H.E, Gen. Yoweri Kaguta Museveni and all Ugandans on this day, as we celebrate the 37th NRM Anniversary. 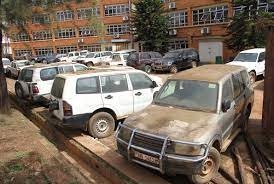 This is how we should improve the maintenance of Government assets. 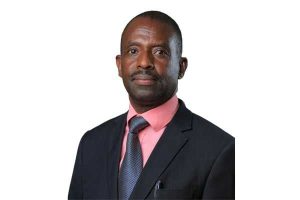 In public procurement, there is a concept called life-cycle costing, or LCC. This concept, in brief, refers to the costs associated with obtaining, owning, and disposing of a product. In other words, when you purchase a product, you always pay a price. The cost price, however, is just one of the cost elements in the whole process of purchasing, owning and disposing a product after it has served its purpose. LCC, therefore, is about all the costs that will be incurred during the lifetime of the product you purchase.

This concept is as important to an individual as it is to government. In fact, in many cases, it is more important to government because, the resources used to acquire property belong to the taxpayer. That is why, for quite some time, there has been a lot of hue and cry about abandoned and disused government assets, notably motor vehicles.

The Public Procurement and Disposal of Public Assets Authority (PPDA), is always inundated with questions as to why we are not ‘selling’ derelict government vehicles strewn over yards of different government ministries, departments and agencies plus local governments. These are legitimate concerns of citizens, one should say but, probably, not accurately directed to the responsible offices.

Before we delve into the details of the LCC and the disposals processes, we may want to first put the record straight.  Public procurement and disposal are a decentralized function in government. The accounting officers of different ministries, departments and agencies, plus cities, municipalities, districts and town councils are responsible for the acquisition and, ultimately, disposal of all property in their jurisdiction. True, the PPDA is responsible for advisory services, procurement audits and compliance checks. But that is how far it can go. The law recognizes the accounting officers, as the ultimate custodians of government assets under their respective dockets.

In addition to the accounting officers, who are technical persons, there are other stakeholders who should be interested in the acquisition, utilization and disposal of public assets. These include persons who the play the oversight role, say, the district Councillors and other elected leaders. There are also members of the boards of directors and other committees that supervise the different government entities. These are the eyes and ears of the ordinary citizen in respect of assets of government.

In a session of, say, a district or a city council, why would the Councillors spend all the time discussing everything else but somehow forget to discuss the assets rotting away in their yards?

With regard to aforementioned concept of LCC, the life span of most assets procured by government is actually known. In the case of vehicles, at a certain mileage or number of years on the road, a vehicle is supposed to be disposed of. And even if the mileage is not necessarily the major consideration, if a vehicle is no longer roadworthy, the responsible government entity ought to plan for its disposal.

What does the law say about an asset that is past its best and no longer required by government? Section 87 of the PPDA Act 2003, as amended, provides for methods of disposal of government assets.

According to the PPDA Act, public assets may be disposed of by public auction, sale to public officers, destruction of the assets, conversion or classification of assets into another form for disposal by sale, transfer to another procuring and disposing entity or donation. Other methods are public bidding, direct negotiations, trade-in and electronic auctioning.

It should further be noted that Section 96 of the PPDA Act, requires the minister, in consultation with the PPDA, to issue regulations for the efficiency of the procurement and disposal function in the country. Accordingly regulations for the disposal of public assets were duly issued under statutory instruments No. 13 of 2014.

Under this instrument, the role of the accounting officer stands out clearly. The regulations provide that for “purposes of disposal planning, an accounting officer shall, in each financial year, cause the public assets of a procuring and disposing entity to be reviewed, to identify the public assets to be disposed of in the following financial year”.

And the same regulations delineate the circumstances under which a particular disposal method should be applicable.

Citizens have every justification to sound us out if, and when, they detect the mismanagement of public assets. And it is not just the PPDA, but rather the accounting officer and other stakeholders in a given entity who have a duty to listen to the citizens on matters of assets that are no longer in use. The PPDA has, and will continue to perform, the advisory and regulatory function to help entities deliver on these responsibilities. 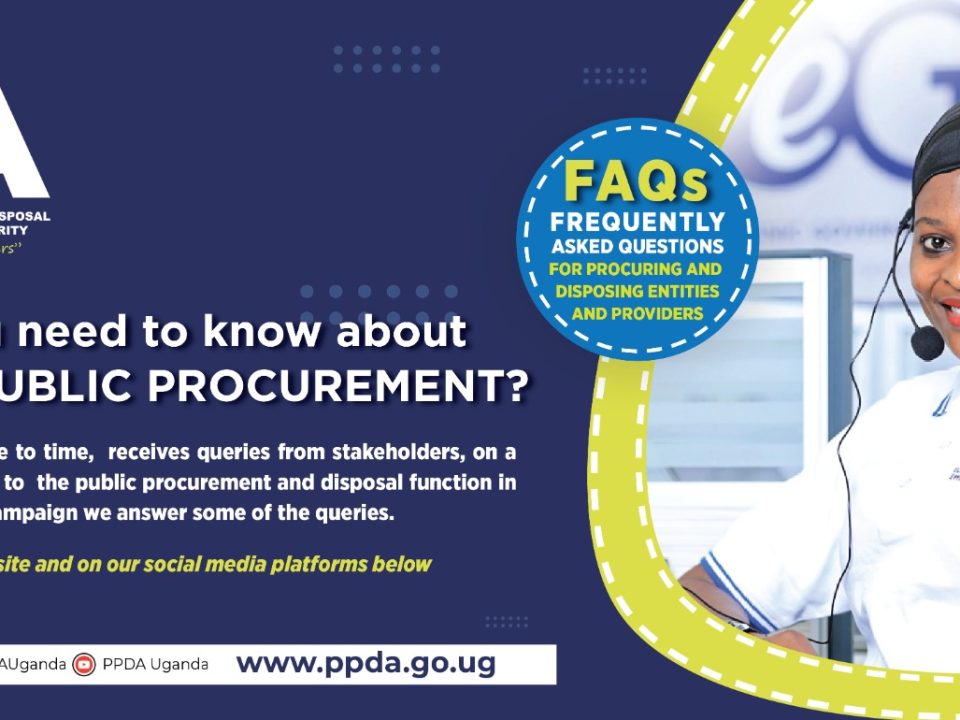 What you need to know about PPDA/Public Procurement. 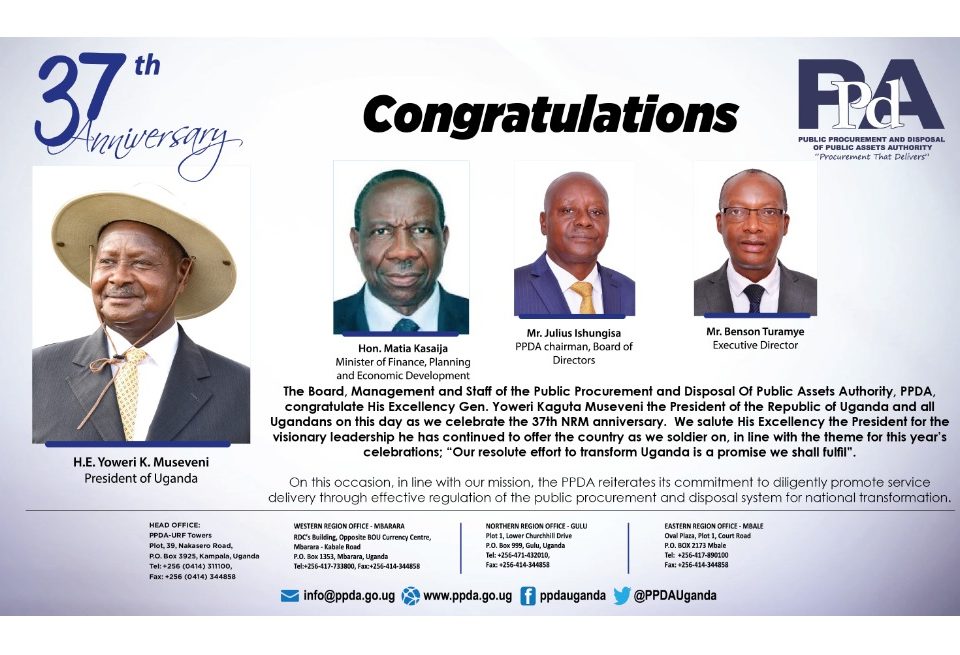 The Board, Management and staff of the PPDA congratulate H.E, Gen. Yoweri Kaguta Museveni and all Ugandans on this day, as we celebrate the 37th NRM Anniversary. 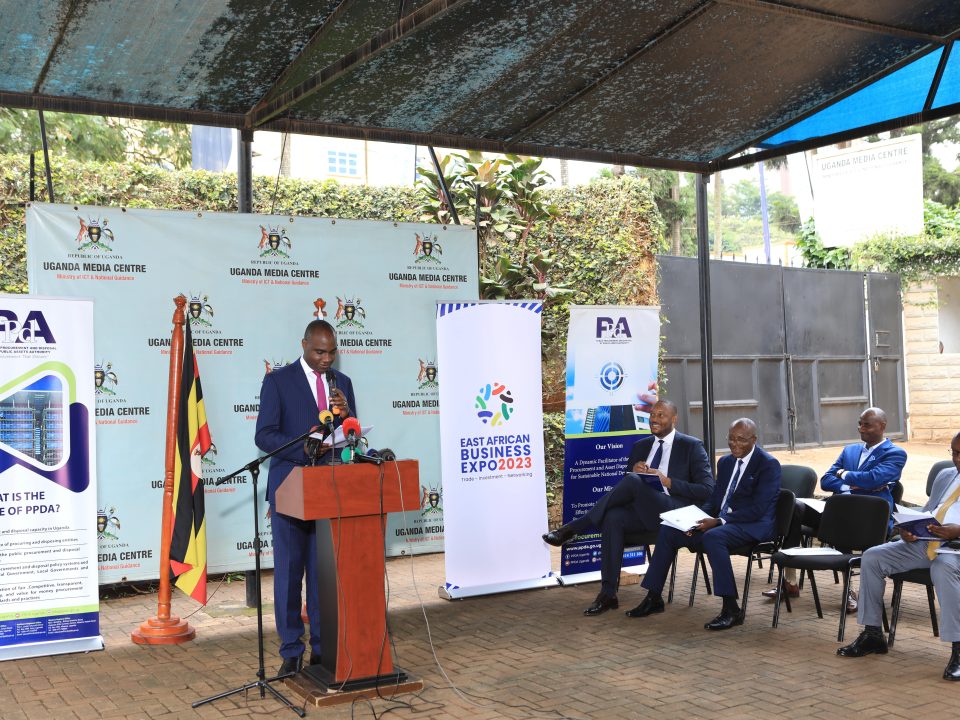